A subset of hydroponics is aquaponics. The term is a combination of the words aquaculture (the raising of fish) and hydroponics.

The concept is a rather simple one. Water from a pool or pond in which fish are housed, and the nutrients it contains as a result of the breaking down of fish waste, is circulated through a closed system to make contact with plant roots in a soilless medium. 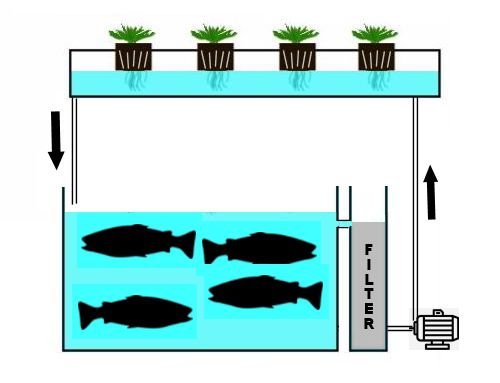 A bio-mechanical filtration system sits between the aquaculture and the hydroponic sections. Solid and liquid fish waste, ammonia, is broken down there, through a process known as nitrification, into nitrites and further into nitrates which can be absorbed by the plants as nutrient. Nitrates, the long term build-up of which would be detrimental to the well-being of the fish, are reduced or removed from their ecosystem by the plants.

In a hobbyist environment, ornamental tropical fish, goldfish or koi might be used in the aquaculture portion of the system. Larger scale professional operations also consider the animals as a marketable commodity, raising tilapia or other farmable species for sale as well as the plant crop.

As straightforward as the system is, there can be drawbacks. The aquaculture portion of the system must still be maintained so as to ensure the fish are kept healthy. Temperature fluctuations of more than a few degrees within a 24 hour period can be stressful to the animals and endemic parasite outbreaks can occur. Secondary bacterial infection can also result. Obviously, medications to deal with such infections may not be desirable to introduce into the hydroponic portion of the system.

It must also be noted that the plants will not necessarily remove 100% of the nitrates from the system. Over time, increased levels of nitrate can be as detrimental to the fish as its more toxic counterparts ammonia and nitrite. Monitoring and steps to dilute nitrates to a level safe for the fish must be taken.

Since the system will most likely be outside, where it is subject to fluctuations in temperature both during the day and seasonally, cold water species less sensitive to temperature variances, as are goldfish and koi, are more desirable choices. Tank location in a shaded area in the warmer months, and an thermostatically-controlled immersion heater in the cooler months both will help.