Feel bad every time you look in the refrigerator crisper bins and find stuff going to rot, or set a bag of grass clippings at the curb, knowing it's just going to a landfill? There's a gardening bright side to these dilemmas, and it's called composting.

Before we start talking about making compost, let's talk about what should and should not be used in a compost pile.

A compost pile should be made up of a mixture of carbons and nitrogens, often called "browns" and "greens". Without getting all scientific, if it's dried and brown, it's mostly carbon; if it's still green and moist, it's relatively high in nitrogen. Ideally, you want a ratio that's overall more browns than greens, about 25:1 carbon to nitrogen. It's tricky to achieve a precise ratio, however, because each item has its own ratio of carbon to nitrogen.

What's important to know is that, if you have too much carbon (i.e. not enough nitrogen), you'll have a pile that won't do much but sit there. If you have too much nitrogen, you'll have a stinky, slimy pile. If you are to err one direction or the other on the ratio, it's better to have a little too much green than too much brown. When the ratio is right, you'll see things start to turn grayish, and if you have a long-stem thermometer you'll find the interior of the pile surprisingly hot. Yes, hot-- the bacteria working on the compost will create heat in a range as high as 160-175°F. A positive effect of this heat is the sterilization, and therefore reduction of disease organisms and weed seeds in the finished compost.

To help get an idea of what materials are higher in carbon, and which are higher nitrogen, I have color-coded them above. While not a carbon or nitrogen, eggshells are often included in compost piles because of the valuable calcium they supply.

For quickest results, your pile or composter should be placed where it gets a good bit of direct sunlight to help keep things warm, and the bacteria working well. From time to time, turning the pile is advisable, to distribute the bacteria more evenly. On large piles, you can use a pitchfork or shovel. In a pre-made composter, a power-drill with an auger bit like those used to dig holes for plant bulbs works well.

Once the composting activity is complete, it's ready to use. You'll know this when the pile looks like soil, and none of it looks like any of the individual materials you originally put in it. Some commercial composting units even have a door in the bottom, so you can harvest the best, oldest compost from the bottom of the pile, leaving unfinished compost on top.

What's that, you ask? It's actually nothing more than a fancy term for composting using worms. It's easy, and is probably one of the best things you can do for almost all your plants.

Worm castings, as they are called (conjuring up images of industrious little worms gracefully "casting" their... well... their "worm poo"), are one of the most nutrient-rich forms of organic fertilizer you can use. All you need is a dark-colored, covered-but-vented bin, some kitchen scraps, some moistened shredded up newspaper, and a pound or so of worms.

Not just any worms, mind you, but a couple of particular species that excel at producing this gardener's black gold. The most common species used are the red wiggler (eisenia foetida) or the so-called European nightcrawler (eisenia hortensis), with the red wiggler being the most popular. The Euros are a bit bigger, and reportedly don't produce quite as fine a final product, but, if they're all you can get, should work just as well.

A dark-colored bin is best, since the worms don't like light. Some ventilation is mandatory, and a method of drainage is also useful. You could use a plastic tote bin, found nearly everywhere, to start vermi-composting. Poke a few dozen holes in the lid with a very small nail-- worms can squeeze through holes as small as 1/16 of an inch. Do the same around the perimeter of the bin about 2" up from the bottom. Place a thick layer-- 6 inches or more-- of shredded moistened newspaper in the bottom. Not too wet or packed too tight-- make it a bit fluffy, and none of the shiny slick stuff-- and then add your worms. They will immediately burrow down into the newspaper to get away from the light. Add some vegetable scraps from the kitchen, cover them with a few layers of wetted newspaper (not shredded), and put on the lid. Check under the newspaper every few days to see the worms' progress, adding more food scraps only as necessary. Add some more moistened torn-up newspaper from time to time, too-- they'll eat it as well.

Don't have a paper shredder? Let your worms help prevent identity theft by feeding them your last month's credit card statement-- with today's soy-based inks, your worms will devour it with no problem. Ultimately, your worms will eat half their weight in food every day!

A word about kitchen scraps: Vegetable or fruit peelings, coffee grounds, tea bags, stale cereal are all fine. No meats, fats, bones, or dairy products. Some say no onions or garlic as these have an antibiotic effect on the beneficial microbes in the compost. Others say go light on citrus rinds, as the the worms don't like the acidity. Your worms will like you more if you chop up their food somewhat before adding it to the bin-- it will make their work easier and faster. For tougher scraps, like broccoli stems, go ahead and cook them with the people part of the food, and then pluck out the worms' share before serving. Also, be ready for a surprise if you put vegetable seeds in your bin-- they'll germinate and sprout like crazy in this dark, moist, fertile environment.

If you can, provide some kind of drain in the bottom of your bin, even if it's only a hole with a cork in it. Moisture will work its way down and collect in the bottom. Draining it has several benefits. One, you won't have any drowned worms-- unlikely, but possible. Second, the liquid that you drain out isn't trash, it's the liquid form of this gardener's black gold-- worm tea. It will be very concentrated-- you can add a mere few ounces of it to a gallon of water, and it will still be darker than strong coffee. Give all your plants a treat while you wait for the worms to finish their work. In a ten gallon tote bin, you can even safely add about a quart of water a week to help create more tea without seriously affecting the worms. Just don't forget to drain it out and use it. If there's more than you can use up, keep it in a jug with a hole punched in the cap, so the beneficial microbes therein can breath.

Keep your bin in a relatively cool location out of direct sunlight if kept outside. A garage or basement are also good spots. You can even keep it in your kitchen if you want-- it has no unpleasant odor whatsoever (unless you perpetually over-feed). At most, your bin should have a subtle, natural, earthy aroma.

Once your compost is ready, it's time to harvest it. How do you know it's ready? Like regular compost, you won't be able to discern any of the materials you put in the bin originally. Nothing will look like paper or kitchen scraps or tea bags at all.

How do you harvest it if it's still full of worms? Simple. One way is to only feed them on one side of the bin. The worms will move to that side to feed, leaving the other side virtually worm-free. Another way is to spread out sheets of newspaper on a table. Gently scoop out baseball-sized mounds of compost and place them in rows on the newspaper. Turn on a bright light directly overhead. The worms will move downward in the mounds, and you will be able to brush or scoop off the tops of the mounds a little at a time as they do.

The bin described above will produce plenty of worm compost and worm tea for the average gardener or plant keeper, but, if you prefer a more elegant solution, there are products like the Can-O-Worms. 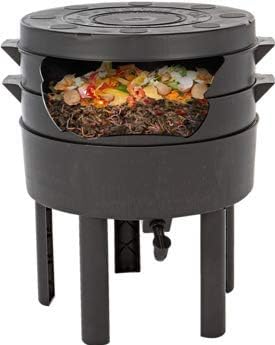 It has a vented base, a vented cover, and three trays which are used in rotation. You start with a single covered tray sitting in the bottom section, and feed the worms until the compost fills the tray up to a certain level. Then you add another tray, and put some newspaper-covered food in it. The worms move up to the upper tray as they finish composting their food and bedding in the lower tray through hundreds of worm-size holes. The bottom section even has an island for worms who fall through the bottom tray to get out of the collecting liquid and back up into the trays. A handy drain with a valve is provided to dispense worm tea. A starter block of bedding is included-- about the size of a large brick, it expands to almost 4 gallons in volume when water is added. The worms, if not available locally, can be mail ordered from worm farms all over the country. Keep them happy, and they will make vermi-compost-- and lots more worms-- for years to come.